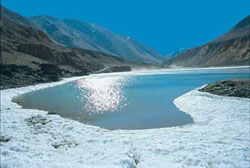 The capital of the Himalayan principality of Ladakh, situated at an altitude of about 3500 meters above sea level. In ancient times, stayed at Leh caravan on its way through the mountains to the distant cities of the Silk Road, such as Yarkand, Kashgar, and regions of Kashmir and Punjab. Buddhism - the religion of the majority Leh. Accordingly, the major attractions here are the Buddhist monasteries, gompa, located in the most incomprehensible places - on ledges of tall mountains, at the edges of ravines. Leh also has many interesting old houses with prayer wheels, several mosques, a large Buddhist center, clinic of Tibetan medicine, a school of Tibetan Thangka painting and a large field for playing polo at the yearly festival ladahsky. From anywhere, Lech visible Lehsky palace since He is on the slopes of the mountains, where you can enjoy beautiful views of the city, it is well to contemplate sunrises and sunsets. Leh - one of the most beautiful places in Asia, as well - an ancient center of Tibeto-Buddhist culture. His colorful monasteries attract Buddhist pilgrims and tourists from around the world. 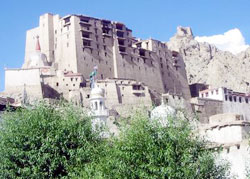 The Royal Palace sits high on a hillside Tsemo, and it offers a splendid panorama of the city, Lech, fields, leading into the distance - to the Indus River and surrounding mountains, Zanskar. This nine-building perched on a ledge of rock, resembling a small town in the mountains. It seems to be hanging from the towering rock cliffs, violating all laws of gravity. The palace was built in the XVII century Senge Namgyal - the most famous ruler of Ladakh, but left in the XIX century, when Kashmiri forces besieged the city. Family monarch moved to Stoke, 17 km south of Leh, on the southern bank of the Indus. Now Lehsky Palace, located in the ruins, like a miniature of the Potala Palace in Lhasa. Palace, as well as other buildings in Ladakh, was built of baked bricks in the sun and has nine storeys in height. At the bottom level has a warehouse to store fodder, dry meat, fruits, vegetables and wood, and the upper tiers arranged accommodation for the royal family, the royal chapel, guest rooms, throne room, reception hall and rooms to perform religious ceremonies. In the palace about 100 rooms, most of whom, unfortunately, access is now closed.
Namgyal Tsemo 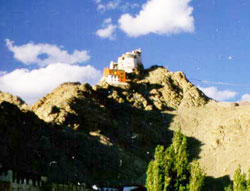 During the reign of Tashi Namgyal on a mountain top Namgyal Tsemo (now the peak of Victory) was built a fort and monastery complex in 1430 g, which serves as the royal residence at Leh. Although it is a fort destroyed Gonkhang, or temple of the divine guardians, located below the still used for religious ceremonies. According to legend, after defeating the Mongols, the bodies of the Mongol soldiers were the basis for the foundation of this temple to propitiate the gods-patrons, and to prevent new attacks against the invaders. In Gonkhange kept the first portrait of King Tashi Nagyala, shining in the Kashmir-mugalskom attire with a turban, a symbol of royal power in the head. There is also a small temple Suncare - with a beautiful picture and the thousand tysyachegolovogo Avalokitesvara and the Temple of Maitreya, the Buddha of the Future, featuring a colorful mural painting.
Jama Masjid
The historical mosque is situated in the heart of Lech. Built in 1666-67 years. as a result of an agreement between the Mughal Emperor Aurangzeb and then ruler of Ladakh Deldan Namgyal. Since then it has been repaired several times and built upon. Could have helped oust from Ladakh Mongolian army. Although Muslims have begun to live in Ladakh more in the XV century., Muslim shrines were built there later. Several years ago, the Jama Masjid was rebuilt.
Main Bazaar
Lively street where they sell antiques, precious stones, capes made of wool yak, ornaments of turquoise and coral and ritual utensils, such as prayer wheels. Along the road sitting resident of nearby villages with large baskets full of fresh vegetables.
Old Quarter
String of narrow streets with chortens, money and houses of burnt bricks in the sun. Shanti Stupa
"Peace Pagoda" - sparkling snow-white stupa, built in the 1980s with the support of Japanese Buddhists, is located on a hilltop in the western part of town.
Jokhang
The modern center of Buddhism is located near the main bazaar
Choglamsar
The main settlement of Tibetan refugees in Ladakh, where you can see beautiful Buddhist temple, a nursery school TCV, Central Institute of Buddhist Studies, a hospital, a solar-powered and workshops that produce colorful Tibetan handicrafts.