Nestled in a winding mountain valley Hemis - the biggest and most famous in the Buddhist world gompa of Ladakh. The monastery houses a rich collection of precious statues and relics, and a library with ancient manuscripts, including our compatriot and explorer Nicholas Roerich found in 1888 a unique manuscript, indicating a stay of Jesus Christ in North India, it is known as "The Life of Saint Issa - the best of the sons of men. " Hemis is also famous for its annual prazdnetstvom monastery in honor of Guru Padmasambhava, the monks, dressed in colorful clothes and heavy masks perform ritual dances and the parade was called the greatest relic of a huge thangka (Buddhist icon), the height of three floors and decorated with embroidery, pearls and precious stones .
Tiksi
Tiksi monastery, situated atop a hill looking at the Indus, is one of the biggest and most impressive Gompa. On the territory of the monastery - eight temples, altars are decorated with statues, murals and tanks, but in the main temple is a statue of a seated Maitreya Buddha, which occupies two floors and situated in such a way that neither the first nor the second floor is almost impossible to see the whole the entire story, which symbolizes the outrageous (transcendental) nature of the buddhas who have a physical body and the universal consciousness. Gompa about 500 years, but the oldest buildings - the upper house and the upper library, still preserved by the royal palace, they are around 700 years. At 7 am on the roof top of the temple out 2 monk with tunami (Buddhist mountain) and announce their sounds the whole neighborhood. At this time, start puja. Usually pujas are held in three churches. In the main - a large, involving almost all the monks, including children. Live in the monastery 110 monks, 60 of them - the young lama. Lunching monks during the morning puja, a large temple. From the roof top of the temple offers a breathtaking panoramic view over the valley of the River Indus. From here you can watch the dawn and sunset and the starry sky.
Shay
Shay was the ancient capital of Ladakh. In his abandoned palace is a temple with a giant statue of Buddha, surrounded by gilt frescoes. Directly beneath the palace are huge pictures of five meditating Buddhas carved into the rock.
Fiyang
In the pretty village of Ladakh is Fiyang monastery - one of two owned by the sect Drigungpa. He was laid ladakhskim ruler Tashi Namgyal. Among other treasures here there is an extensive and very interesting collection of Kashmiri bronze sculptures of Buddhist deities and XIII in the earlier period
Spituk
At the top of the mountain is located in the monastery Spituk XV. It is the oldest temple of the Gelug-pa sect in Ladakh. Here is placed the library of the founder of the Order Tsonghapy and sanctuary Bodhisattva Tara.
Stock
The palace was a residence in Stoke Namgyal, the rulers of Ladakh since 1843, part of the palace turned into an excellent museum dedicated to this dynasty, is on display costumes and decorations, fabulous tsarist period, great bowls of jade, weapons. The collection includes the Palace Museum and 35 thanok depicting the life of Buddha, sculptures and religious objects - such as a bell and Dorje, amazing skill of execution. The royal family has lived here ever since.
Bugsy
In the Bugs are beautiful frescoes of XVI century fort and the temple of the Maitreya Buddha (Buddha of the Future).
Ridzong
Here are 2 of the monastery: female and male Julichen Nunnery Rizong gompa. Both of them with schools, in a female student of about 40 girls. Monastery of the more impressive, built on a hillside here 2 of the temple, a special room upstairs in a three-dimensional model of the mandala. Woman looks less solid, but girls are less spoiled by tourists, more sociable.
Math
This is the only ladahsky monastery belonging to the Sakya sect, built in XVI century. Here live two monk-oracle to predict the fate and answer the questions posed in a trance. During the annual feast in Tiksi, these monks oracles, after months of meditation and fasting, are blindfolded to the top parapet of the monastery over a 30-meter cliff.
Stakna
The monastery of the XVII century has wonderful silver devil and bright murals.
Chemri
WHere, Buddhist texts are stored in a silver frame, written in golden letters.
Thak-thok
The monastery belongs to the Nyingma-pa sect. Built in the cave where the saint meditated XVIII century Padmasambhava.
Likir
An ancient monastery in Likire keeps a fine collection of sculptures and thangka with carved wooden railings. Sculpture of Maitreya in the monastery Likir so great, that does not fit into the temple and is situated in the open. 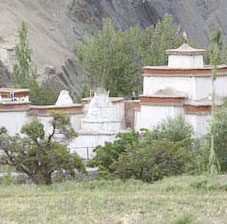 Alchi
Alchi (XII century) - a bright pearl among the monasteries of Ladakh, one of the main attractions of these places and the acknowledged center of Buddhist art. The five temples Alchi presented all the divine pantheon of Mahayana Buddhism. Two of the oldest temple Dukhang and Sumtsek have amazing frescoes, Kashmiri painters. Dukhang (assembly hall) is located in the old temple, there is stored the most important shrines of the monastery complex: the main Buddha image - Vairochana framed by a beautiful carved frame, depicting dancers, musicians, elephants and mythical animals, close - four meditating Buddha. Here are stunning mandalas, decorated with scenery. Sumtsek - second oldest temple. The temple is known for the giant statues of Avalokiteshvara, Manjushri and Matreyi, which occupy two levels. Richly decorated with statues: the statue of Avalokitesvara is covered with images of shrines and palaces Matreyi - episodes from the life of Buddha, Manjushri - 84 images of the masters of Tantra. Here are five images of Green Tara, which is also referred to as the savior. Three other church (Madzhushri Lhakhange, Lotsawa Lhakhange, Lhakhang Soma) is also interesting frescoes, sculptures and paintings. In Lotsawa Lhakhange are paintings and sculptures dedicated to Rinkchenu Zangpo.
Lamayuru
The oldest monastery of Lamayuru ladahsky, Founded in 1911 in the famous Mahasiddhas Naropa, after several years in meditation in a cave. The monastery was built in such a way that the spiritual assembly hall, 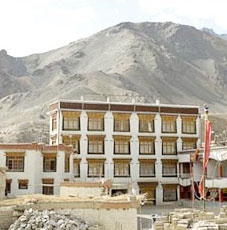 dukhan directly connected with the cave in which the Naropa meditated. Known six yogic practices that are described are required to Naropa. This mystic heat yoga, yoga, illusory body, dream yoga, yoga of clear light bardo yoga - the transition state between death and subsequent reincarnation, and yoga transfer of consciousness. These yogic doctrine partially included in many subsequent practices associated with the traditions of yoga, tantra, Tibetan Buddhism and other schools of Mahayana Buddhism. The oldest temple keeps its famous image Vairochana - a meditating Buddha. Lamayuru is also famous for a wonderful collection of thangka. The monastery belongs to the direction of the Buddhist schools Nyingmapa ("Red Caps"). But it has long been a haven for followers of the Bon religion. Currently live in the monastery in 1922 young lamas and monks to 8 adults. The last 20 km to Lamayuru the road is very beautiful, passes a bright turquoise of the river's rocky shoresAnd then rises high in the mountains, it seems that you are driving on the moon's surface
Samstangling
This monastery is a spectacular sculpture is among the verdant fields near the village of Sumur

Sledge
One of the most ancient places in the Western Himalayas. According to legend, the monastery was founded by Padmasambhava in the VIII century. The main temple is decorated with beautiful frescos. Here is the Kanika Chorten, believe that its name comes from the name of King Kanishka, whose empire in the first centuries of our era stretched from Afghanistan to Varanasi.
Karsh
Monastery Gelug-pa sect, according to legend founded by Padmasambhava. Here lives a large community of monks, held lavish celebrations. Interesting frescoes in the main temple, as well as ancient rock paintings. 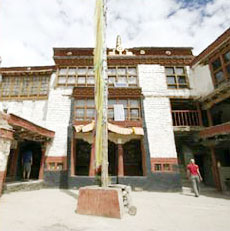 Bardhan and Phugtal
Inaccessible and hidden from human eyes, you can get here only by sufficiently complex walking trail along the steep rocky slopes above the River. Bardhan - one of the most interesting in Ladakh. The main temple of this magnificent monastery is situated inside a huge cave on a steep wall, located above the river scratching. Below, right into the rock are monastic cells, the whole complex system of ladders and related transitions. Beautiful murals decorate the walls. Nobody remembers the founding of the monastery and all of its existence is shrouded in mystery. Belongs to the Gelug-pa sect.
Stongdi
Here are seven churches with wonderful frescoes.